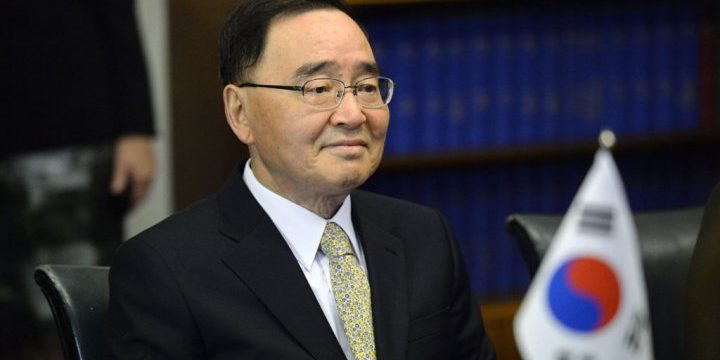 South Korea’s Prime Minister Chung Hong-Won resigned on Sunday amid public anger over the sinking of a Sewol passenger ferry, admitting that he had not been up to the task of overseeing rescue operations for the 476 people on board.

More than 300 people, many of them high-school students, have been confirmed dead or are still listed as missing in the tragedy, and many are incensed over what is being viewed as a bungled official response to the tragedy.

“I offer my apology for having been unable to prevent this accident from happening and unable to properly respond to it afterwards,” Chung said.

“I believed I, as the prime minister, certainly had to take responsibility and resign.”

The families of the missing and the dead have blasted the response to the accident, saying the rescue and the evacuation were too slow, possibly costing lives.

There has also been rage over perceived corruption and lax safety standards that may have led to the disaster, with claims that the ferry was overloaded and the passenger list was inaccurate and incomplete.

“The latest accident left all South Koreans in great shock and sorrow. [Many] days have passed since the accident, but the screams of families of the missing still keep me up at night,” Chung told a nationally televised press conference.

“I sincerely hope that South Koreans and families of the Sewol victims will forgive and understand me for being unable to fulfil my obligations until the end. I beg you once again to rally support [for the rescue operations].”

The ferry listed and then began sinking on April 16 while on a routine trip from the port of Incheon to the traditional holiday island of Jeju.

The confirmed death toll from the tragedy stood at 187 on Sunday with 115 unaccounted-for, their bodies believed to be trapped in the sunken vessel.

Divers have been battling decompression sickness and atrocious weather in their grim search for corpses.

Further complicating their efforts was the increasing depth of the wreck as it sinks slowly into the silt of the seabed, making an already dangerous diving operation even more hazardous.

Despite waves up to three metres (nine feet) tall and near gale-force winds, teams were still trying to search the ferry.

A coastguard spokesman said 98 frogmen would be trying to get into rooms on the fourth deck of the 6,825-tonne Sewol, but he warned the worsening conditions were making things hard.

“A growing number of divers are reporting decompression sickness,” he said. “We are trying our best to make progress in these difficult weather conditions.”

“As the ship has sunk further… the diving depth also increased to more than 40 metres (130 feet), posing even more difficulties for search efforts.”

Pressure rises as divers go deeper, increasing the amount of air they breathe from their tanks.

This not only reduces dive time, but also heightens levels of nitrogen in their bloodstreams, raising the risk of potentially harmful bubbles forming in body tissue. This decompression sickness, known as “the bends”, can cause long-term health problems.

Although all hope of finding survivors has been extinguished, there is still anger and deep frustration among the relatives of the missing over the pace of the recovery operation.

It took divers two days to get inside the ferry after it sank, and a further two days to bring up the first bodies.

Strong underwater currents, poor visibility and the presence of debris make the operation as difficult as it is harrowing.

One room they were able to access earlier in the week contained the bodies of 48 young students, all wearing life jackets.

All 15 crew in custody

On the surface the recriminations continue, with four more of the ship’s crew arrested on Saturday. All 15 surviving crew members are now in custody and facing charges ranging from criminal negligence to abandoning passengers.

Prosecutors have also raided a host of businesses affiliated with the ferry operator, the Chonghaejin Marine Company, as part of an overall probe into corrupt management.

The widening investigation has seen travel bans put on eight current and former executives of the Korea Register of Shipping – the body responsible for issuing marine safety certificates.

Around a quarter of the dead recovered so far have been found in waters outside the sunken vessel, and there are fears that some of the missing may have drifted free from the wreck.

Authorities have installed 13-kilometre-long (8-mile-long) nets anchored to the seabed across the Maenggol sea channel to prevent the dead from being swept into the open ocean.

Dozens of other vessels and helicopters have been scouring the site and beyond, with the search operation expanded to up to 60 kilometres from the scene of the disaster, with coastal areas and nearby islands also set to be searched.

sourced from FRANCE 24 with AFP