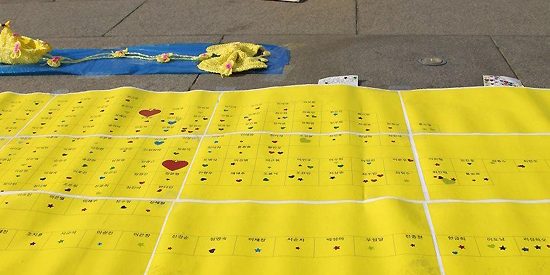 ANSAN, South Korea – Teenagers who survived the South Korea ferry disaster told on Monday how classmates helped them float free as water flooded their cabins despite crew instructions to stay put even as

the vessel sank. Six teens, whose names were withheld to protect their privacy, were giving testimony at the trial of 15 crew members, who face charges ranging from homicide to negligence for abandoning the

sinking ship. The ferry Sewol sank on April 16, killing 304 people, as many as 250 of them school children on a field trip.

“We were waiting and, when the water started coming in, the class rep told everyone to put on the life vests … the door was above our heads, so she said we’ll float and go through the door and that’s how we came out,

” one of the teenagers said. “Other kids who got out before us pulled us out.” Others described how coastguard officers waited outside the stricken ferry for passengers to swim out rather than entering the ship to try

and rescue them. “They were outside. They pulled us [onto boats] but they didn’t come inside to help,” one said. “We said to ourselves, ‘why aren’t they coming in?‘”