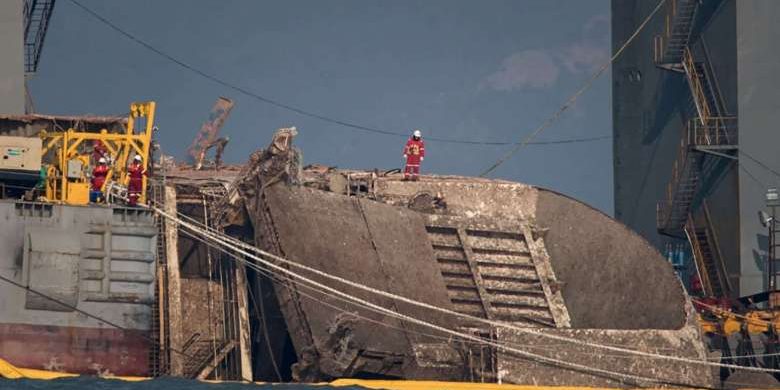 after it went down with the loss of more than 300 lives and dealt a crushing blow to now-ousted president Park Geun Hye.

Television pictures showed one side of the 6,825-tonne vessel, its white structure rusted and filthy, above the waves between two giant salvage barges.

The complex operation – one of the largest raisings of an entire ship ever attempted – comes as the third anniversary approaches of one of the country’s worst-ever maritime disasters.

Almost all the dead were schoolchildren and it is thought that nine bodies still unaccounted for may be trapped inside the ship which sank on April 16, 2014.

Raising the ferry intact has been a key demand of the families of the victims.

Several relatives watched the much-anticipated operation unfolding from a boat near the site.

“To see the Sewol again, I can’t describe how I’m feeling right now,” said Mr Huh Hong Hwan, whose 16-year-old daughter was killed in the accident. Her body has not been found.

Mr Huh and his wife have for years maintained a bitter, defiant vigil in Jindo along with a handful of other relatives of missing victims.

Another parent Lee Keun Hui tearfully called for public support and prayers to help move the ship onshore intact and a full inquiry into the sinking “so a tragedy like this would never ever happen again”.

“It breaks my heart to see the ship coming up,” she said. “My daughter has been trapped in such a dirty, dark place for all these years.”

Other bereaved family members have kept watch at a camp on a hilltop on Donggeochado – the nearest island to the site, just 1.5 km away.

Dozens of salvage operators walked over the hull after it came to the surface, television pictures showed.

“Workers are on the Sewol ferry to fasten it to the barge,” Seoul’s maritime ministry said in an e-mailed statement.

About 450 workers are involved in the Herculean efforts to lift the ship, which now weighs between 8,000 to 8,500 tonnes including the silt piled up inside.

Once the ferry is brought up sufficiently high, it will be moved onto a semi-submersible ship, which will carry it to the port of Mokpo.

“We believe that it will take about 12 to 13 days to lift the ship and move it to Mokpo,” said Mr Lee Cheol Jo, the ministry official in charge of the operation.

The vessel was lying more than 40m below the waves off south-western South Korea and the operation, originally scheduled for 2016, had been pushed back several times because of adverse weather.

The Sewol disaster left the country deeply traumatised and was a crippling blow to the now-ousted leader Park, whose dismissal was confirmed by Seoul’s top court only two weeks ago.

She stayed at her residence for the first few critical hours after the disaster while officials were frantically sending updates and asking for guidance. She has never specified what she was doing for the seven hours,

sparking wild rumours including a tryst and cosmetic surgery.

A permanent Sewol protest site targeting her was subsequently set up in the centre of Seoul, with effigies of the head of state on display alongside pictures of the dead schoolchildren.

Investigations into the disaster, in which 304 people died, concluded it was largely man-made – the cumulative result of an illegal redesign, an overloaded cargo bay,

inexperienced crew and a questionable relationship between the ship operators and state regulators.

Even though the vessel took around three hours to sink, many of those on board never heard any evacuation order, while the crew were among the first to escape to safety.

Captain Lee Jun Seok was sentenced to life in prison for “murder through wilful negligence” and 14 other crew members were given terms ranging from two to 12 years.

Sourced from The Straits Times.