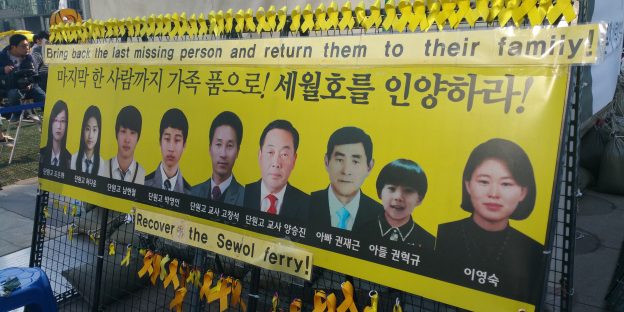 Last week marked the one year anniversary of the Sewol Ferry Disaster.  I had the opportunity to listen to two women speak who both lost their children that day.

One of the woman’s children has yet to be recovered and returned to her family.

The women, along with other families and supporters of the victims, have been organizing for the past year to compel the Korean government to make policy changes that improve public safety in Korea.  In addition,

many people have been protesting to urge the Korean government to raise the ship, do a full, unbiased investigation into the disaster, and return the remaining 9 missing bodies to their families.

Bearing witness to the level of organization, activism, and peaceful demonstration being conducted here in Korea has been a good learning experience for me.

On April 16, 2015, the victims’ families and their supporters sat vigil in Gwanghamun Plaza to commemorate the loss of the 304 victims, which were primarily school aged kids.

I happened to walk through the demonstration at one point and watched as two fathers who lost their children in the disaster were trying to enter the area to be with their families.

The police were maintaining a strong perimeter around Gwanghamun and being very strict about who was permitted to enter and who was not.

The police were shouting back and forth with the fathers and physically blocking their entrance into the area.

This confused me because from what I could see, the vigil was extremely peaceful.  Plus, I had been permitted to walk through the area after showing my American ID.

Later, I heard reports and updates about what was going on at the demonstration and it seems as the days went on, the police became more aggressive with the demonstrators.

Amnesty International is reporting that there were injuries during the demonstrations and the police used pepper spray and other tactics to disperse the protesters.

I wonder why we see this happen- the right to peaceful assembly being denied by the government.  As a country that has been continuously colonized, Korea has a long history of resistance and organizing.

Perhaps that is why the police have such a strong reaction to a group of mourning families sitting vigil.  Or maybe it’s just a matter of public safety- I don’t know.

I can’t help but notice similar themes when it comes to marginalized groups in Korea trying to obtain justice.  The Sewol disaster victim’s families want a just outcome.

Many adoptees who have returned to live and work in Korea also seek a just outcome.  In both instances, it seems as though the people who have been marginalized by systemic injustice are targeted once

again by those same systems.  I’ve learned that it seems to take a large, organized movement of like minded community members to push back against systematic injustice.

It’s been an extremely enriching learning experiencing being here in Korea at a time when the adoption community is here organizing itself to compel change.