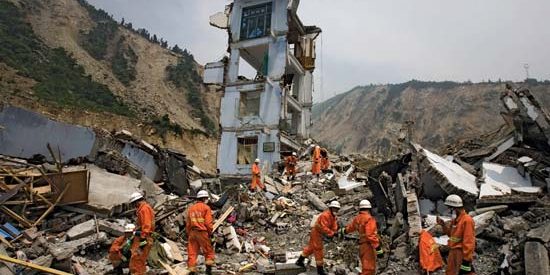 A search continued on Wednesday for survivors of a magnitude 7 earthquake that hit Sichuan province the night before as the local government of the region said the death toll had risen to 13, with 175 injured.

Five Hong Kong people were earlier reported to be missing following the earthquake. But contact was made with four of them, leaving just one still unaccounted for as of Wednesday afternoon.

SAR immigration officials were providing help to try to locate the missing person.

The Immigration Department said up until 12pm on Wednesday, it had received 39 requests for assistance.

The Travel Industry Council said about 40 people from Hong Kong in two package tours are in the affected area.

Council’s executive director, Joseph Tung, said the travel agencies would make arrangements for the tourists to return to Hong Kong as soon as possible.

Initial images emerging from the quake zone showed paramilitary police searching through rubble for survivors. Stunned people were seen milling about on debris-strewn streets, fearful of going back inside in case of further tremors.

At least one aftershock, measured at magnitude 4.2 by the US Geological Survey (USGS), hit the region shortly after the main quake.

Early on Wednesday, a 6.3-magnitude earthquake shook northwest Xinjiang region, thousands of kilometres from Sichuan, according to the (USGS).

It struck at around 7.30am and was followed by two aftershocks of magnitude 5.2 and 5.3, but there were no immediate reports of damage or casualties from the remote area.

The Sichuan temblor was centred near Jiuzhaigou, a valley designated as a national park and Unesco World Heritage Site and which is famed for its waterfalls and lakes.

Xinhua news agency said more than 30,000 tourists at Jiuzhai Valley were relocated to safety with help from tourist buses and private vehicles.

The National Commission for Disaster Reduction estimated that more than 130,000 houses may have been damaged, based on a preliminary analysis of the disaster in Sichuan province.

The Red Cross Society of China said it was sending emergency specialists and volunteers to assist affected communities.

“It may take some time to learn the extent of damage and casualties,” said Gwendolyn Pang, a spokesperson with the International Federation of Red Cross and Red Crescent Societies in China.