Rubble sits in front of a hotel after an earthquake struck Jiuzhaigou County in China’s Sichuan Province.

(CNN)At least 19 people were killed and 247 more injured late Tuesday after a powerful earthquake struck a popular tourist area in southwest China, according to state media.

Of those hurt, about 40 are in a serious condition, state news sae news agency Xinhua reported.
The quake struck Jiuzhaigou County in China’s southwestern Sichuan Province late on Tuesday night.
At least five of the people who died were tourists, Xinhua reported, citing the information office of the provincial government.
About 2,800 people were evacuated from the severely damaged Intercontinental hotel.
Rescuers are still working to clear the rubble, and there are people buried beneath the debris, state broadcaster CCTV said.
There was some disagreement over the size and power of the earthquake.
The US Geological Survey reported a magnitude-6.5 quake 35 kilometers (22 miles) west-southwest of Yongle, Xinhua reported it was 7.0-magnitude, citing the China Earthquake Networks Center.
Residents in Chengdu, the provincial capital — 300 kilometers (186 miles) away from the epicenter — told state media they had felt the quake. 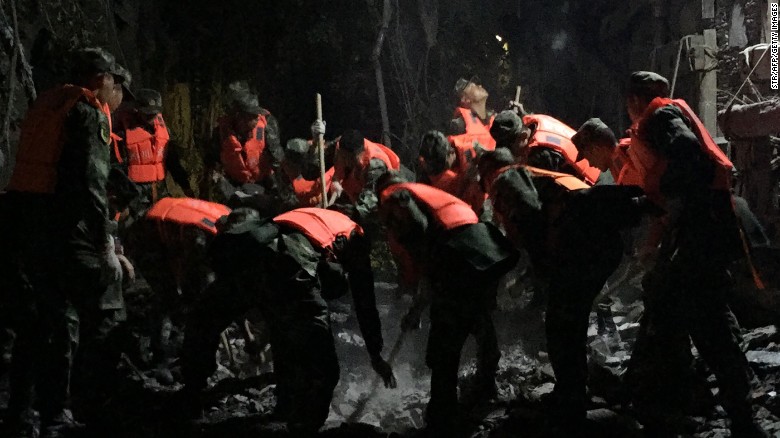 Chinese paramilitary police search for survivors after an earthquake in Jiuzhaigou in southwest China’s Sichuan province early on August 9.
The China Earthquake Administration has launched a Level I emergency response, the highest of its four levels, according to state media.
Almost 400 fire trucks and more than 1,100 firefighters were dispatched to the scene, CCTV said. They are bringing with them 55 life detectors, 30 rescue dogs and 24 generators.
Local authorities announced the closure of the Jiuzhaigou tourist area, which includes a national park known for its waterfalls and topographical formations, beginning Wednesday.
Yu Qian, a local taxation bureau official, told Xinhua that the earthquake cut off power and disrupted phone service in her neighborhood. 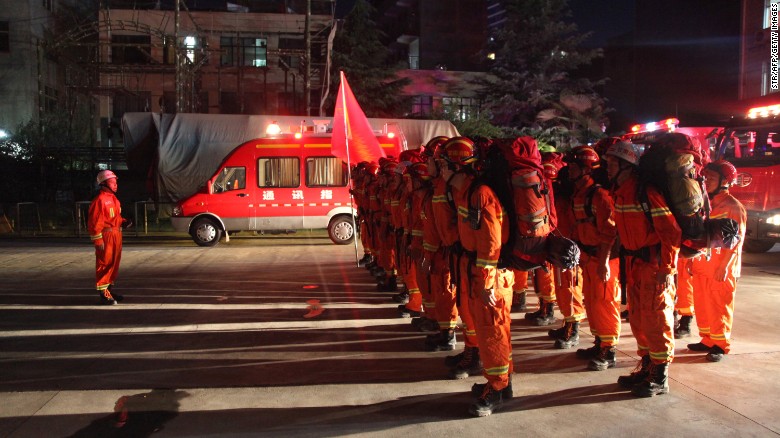 Firefighters in China’s Gansu province preparing to head to Sichuan on August 8.
Photos from the scene showed what appeared to be pieces of buildings lying in the street, a stone the height of a small automobile in the street and a heavily damaged hotel entrance,
its revolving doors twisted and rubble lying in front of them.
The temblor wasn’t the only quake in China in the past 24 hours.
On Wednesday morning, a magnitude-6.3 earthquake struck northwestern China’s Xinjiang Uyghur Autonomous Region, close to the border to Kazakhstan, the United States Geological Survey said.
The quake struck at 7:27 a.m. local time. Its epicenter was 107 kilometers (67 miles) south-southeast of Dostq, Kazakhstan, at a depth of 25.9 kilometers (16 miles), the USGS said.
There were no immediate reports of casualties or damage, due to the sparsely populated nature of the area.