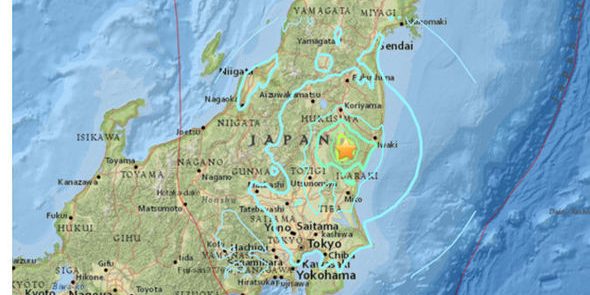 This USGS map shows the epicentre of the earthquake.

A magnitude 6.3 quake has hit Japan’s Kanto region, according to the Japanese Meteorological Agency.The area borders the Tōhoku region, where the Fukushima Nuclear Power Plant had a devastating meltdown in 2011 after a mega earthquake caused a massive tsunami wave.Japan’s NHK news agency said the tremors were felt throughout “wide areas” of the east coast, though the epicentre was not at sea, meaning a tsunami is unlikely.

The Japan News said it was powerful enough to be felt in the same region as the nuclear plant, which is part of Honshu Island.

The Tokyo Electric Power Company, which is still decommissioning Fukushima’s ruined reactors, is investigating any impact of the quake there.

The Fukushima nuclear disaster gave everyone on the PLANET and X-ray’s worth of radiation
5월 5, 2017

These Photos Show What’s Left Behind After A Nuclear Disaster
10월 8, 2015