Six months after the Haiti earthquake, what progress? 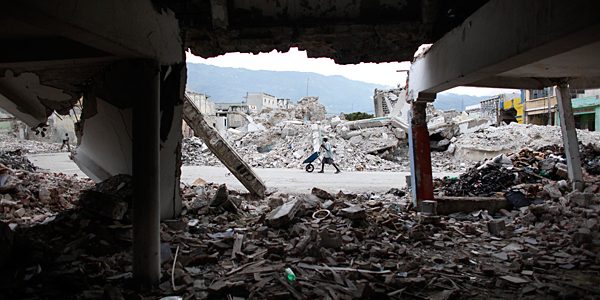 Six months after the 7.0 Haiti earthquake caused one of the worst humanitarian disasters in modern times, the worse-case scenarios have been avoided. Yet tens of thousands still live in camps.

PORT-AU-PRINCE, HAITI; AND MEXICO CITY — At 4:53 p.m., exactly six months ago today, Haiti was ravaged by a 7.0 earthquake that killed more than 230,000 people, left 1.5 million homeless, and created what aid groups have called the most complex humanitarian crisis of modern times.

Six months on, there are efforts to hail. As the international aid organization Oxfam points out, for example, the massive scale of aid response has helped prevent what, in the early days, seemed like a probable worse-case scenario for Haiti: widespread riots for water or housing. Neither has there been, to date, a major outbreak of water-borne disease.

But for far too many Haitians, life has changed little since the moments after the temblor, with many still living in precarious make-shift camps, living day by day, with few prospects for work, and fearing a new disaster as the hurricane season gets underway.

Recommended: Could you pass a US citizenship test?

In the Champs de Mars camp that sprung up spontaneously in front of the National Palace right after the quake, life looks less “temporary” by the day. Very few people there seemed to notice that today marks six months since the earthquake, and that, across the street, President René Préval and former US President Bill Clinton were commemorating the solemn anniversary.

“Nothing has changed in six months. There are still no jobs and no solid shelter,” says Gilbert Gregory, a father of three who was sitting under a white plastic tarp in Champs de Mars. “By now people are used to living in the camps but it’s because they have no choice, not because it’s a good situation. The government didn’t take any responsibility, all this aid came in, but nothing happened with it. It’s difficult to swallow.”

The United Nations Office for the Coordination of Humanitarian Affairsreleased a report to mark six months of relief efforts, including a humanitarian response that provided emergency shelter for 1.5 million survivors.

To date, the UN notes, some 4.3 million people have received food and 1.1 million have received a daily supply of safe drinking water. (According to Oxfam water and sanitation experts, metropolitan Port-au-Prince today has more drinking water and toilets than before the earthquake.) Thousands have also received medical assistance, including 4,000 victims who needed amputations.

These are big feats considering that the government, already weak before January 12, was as devastated by the earthquake as the country it leads.

Seventeen percent of the Haitian government workforce was killed, while all ministry buildings were destroyed except for one, write Prime Minister Jean-Max Bellerive and Mr. Clinton, co-chairs of the Interim Haiti Reconstruction Commission, in a New York Times op-ed. The crumbled National Palace has long been a symbol of the hard road ahead for Haiti.

But enormous challenges remain, and housing sits at the top of the priority list.

Only a fraction of Haitians have been resettled into permanent housing, which is causing frustration to mount.

“Six months on, we need to be looking at recovery, where people can settle into a secure home, have a job, send their kids to school, and have a community around them,” says Julie Schindall, the spokesperson for Oxfam who has been in Port-au-Prince since March. “When I go to camps, and I ask, ‘How are you doing?’ People say ‘We are OK, we have water, we have toilets, there is a clinic nearby,’ but they ask me, ‘When will we get to leave this camp?’ ”

While Ms. Schindall says comprehensive resettlement is not a realistic goal six months on, plans to implement strategies are – and so far there are few that indicate implementation on a meaningful scale.

For too many observers, the recovery effort has been slower than necessary, hampered by inefficiency and bureaucracy, and many Haitians say they feel abandoned by their government six months on. Oberson Saint Vik finds relief from the heat under a blue tarp on a recent day in Champs de Mars. Like many residents here, he used to live in Bel Aire, one of Port-au-Prince’s poorest neighborhoods. He had no idea that a ceremony was underway across the street.

“The government never tells us anything,” he says. “It’s going to take ages before something changes. I don’t know how long.”

Children lined up for a food distribution, which many in the camp say they suspect was a media opportunity because of the government ceremony next door.

Fifteen-year-old Marie Anne Tanis was holding a plastic box with an apple, a piece of bread, and a yogurt. She was accompanied by baby cousins in their best clothes but barefoot. She shares a hut with her parents and 12 cousins and siblings. “Thank God today is a special day, they gave us food and even clothes,” she says. “But they don’t usually do that, and I don’t think they will be there tomorrow.”

The strength of the Haitian people was hailed Monday, including by actor Sean Penn, who has been on the ground participating in the massive recovery effort

“We came down with the idea of spending about two weeks and trying to help out,” Mr. Penn told CBS Monday. “And there’s something that takes over and it’s really an obligation, because you see the strength of the people who have never experienced comfort.”

But he also reportedly criticized the media for losing interest in the story, as have many donors the world over.

The US Center for Strategic and International Studies calculated Monday that just 2 percent of $5.3 billion promised in near-term aid by governments at a UN conference in March, or about $50 million, has actually been delivered to the ravaged country.

Sourced from The Christian Science Moniter