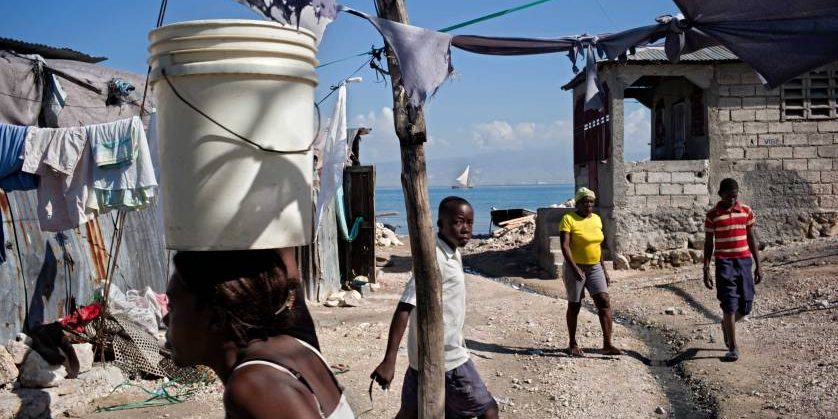 On Jan. 12, 2010, a devastating earthquake with a magnitude of 7.0 struck Haiti, killing more than 160,000 and displacing close to 1.5 million people. Five year later, scars of the tragedy remain in Port-au-Prince, says photographer Gael Turine, who has spent the last 10 years photographing the country.

“When you walk around the country’s capital Port-au-Prince, you still see half-destroyed buildings around town,” he tells TIME. “The wounds are still here, and everyone says that they’re living in worse conditions than before.”

Given the costs of recovery from such a shattering catastrophe, it might seem logical that an impoverished country such as Haiti would still feel the effects a half-decade later, if it weren’t for the unprecedented help the Republic received in its aftermath. “When you look at the history of humanitarian relief, there’s never been a situation when such a small country has been the target of such a massive influx of money and assistance in such a short span of time,” says Turine. “On paper, with that much money in a territory the size of Haiti, we should have witnessed miracles; there should have been results.”

And yet the situation on the ground is dire, says the Belgian photographer: “Two years ago, there were still refugee camps in Port-au-Prince’s center. Now, they are gone, but the people have been merely displaced. They now live in the city’s suburbs – in these prefabricated shacks – [with] a parallel economy.”

For Turine, the international community has crushed the country’s hopes. “NGOs are pulling out, creditors have stopped investing,” he says. “Haitians find themselves in a social and economic situation that is worse than before the earthquake.” And yet, its people subsist. “I feel there’s this collective energy that comes from how close all Haitians live with each other. There’s this idea of collectivity, which leads to certain neighborhoods taking control of their own fate – cleaning up their streets, opening up their schools, etc. They have been forced to take over from the government, which is unable to offer these services.”

Still, he has no doubt that Haitians will weather the crisis, even as it stretches on. “It’s already a victory to see that the country hasn’t exploded, especially when you see what has happened in the last decades — from Jean-Claude Duvalier to Jean-Bertrand Aristide, from the cholera to hurricanes, the country has faced a succession of social, political and environmental crises,” Turine says. “The fact that Haitians haven’t succumbed to madness shows that they’re resilient.”

Gael Turine is a Belgium photographer represented by Agence VU’.

Alice Gabriner and Phil Bicker, who edited this photo essay, are respectively the International Photo Editor and a Senior Photo Editor at TIME.