Could the earthquake in Haiti have been a man-made disaster? 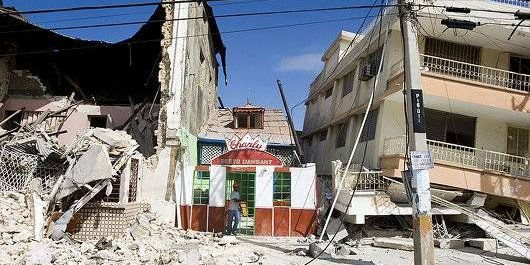 New research confirms that extreme weather and deforestation can cause earthquakes.

If you ever doubted that human action was capable of profoundly effecting the Earth’s ecology, consider this: Scientists now believe that our mismanagement of the environment is quite literally causing the Earth to shake.

New research has confirmed a correlative link between the occurrence of major earthquake events, such as the devastating 2010 earthquake in Haiti, and rapid soil erosion caused by deforestation and man-made climate change, reports the Independent

The idea that the weather plays a role in triggering earthquakes is highly controversial, and scientists have largely discounted previous attempts to establish a link between earthquakes and changes in atmospheric

pressure, such as what happens during typhoons and hurricanes. But a new study, recently presented at the American Geophysical Union in San Francisco, takes a different angle. It looks at how changes to

the weight of soil bearing down on faultlines might serve to release geological stress.

“Very wet rain events are the trigger. The heavy rain induces thousands of landslides and severe erosion, which removes ground material from the Earth’s surface, releasing the stress and encouraging

movement along faults,” said Shimon Wdowinski of the University of Miami in Florida.

The 2010 earthquake in Haiti serves as a particularly telling example, since Haiti sits right along the path of frequent hurricanes in the Caribbean Sea. The nation also suffers from extreme deforestation,

which is also a leading cause of soil erosion.

“The 2010 earthquake in Haiti occurred… 18 months after the same area was hit by two tropical storms and two hurricanes,” said Wdowinski.

Cyclones and monsoons in Southeast Asia could also be a trigger for the earthquakes that routinely happen there. For instance, Wdowinski found that the timing of earthquakes and cyclones in Taiwan over

the past 60 years has demonstrated a statistical correlation.

The correlation is particularly apparent when larger earthquakes, such as those with a magnitude of 6 or higher, are tracked. Some of the worst storms to hit Taiwan in modern times, such as Typhoon Flossie in 1969, Typhoon Herb in 1996 and Typhoon Morakot in 2009, were each accented by major earthquakes in the following years.

“Statistical analysis showed that the timing of the earthquake is above the expected. It is way above background. If it was a random process and there was no relation between earthquakes and cyclones… there was less than 1 percent probability of this occurring,” said Wdowinski.

Wdowinski’s analysis isn’t the only study to have shown a correlation between extreme weather and the frequency of major earthquakes. Summer monsoons in the Himalayas have also been linked to earthquakes,

and a California Institute of Technology study found that earthquakes were more likely to happen during the dry winter months that follow monsoons.

Of course, none of these studies establish for certain that soil erosion is the direct cause of the earthquakes, but it’s an intriguing theory that may finally help to explain the correlation that exists between earthquakes

These findings should also cause a shudder in our collective conscience. Since an uptick in extreme weather is one of the many unfortunate consequences of man-made climate change,

we may want to reevaluate our role in disasters that were once believed to be entirely ‘natural.’