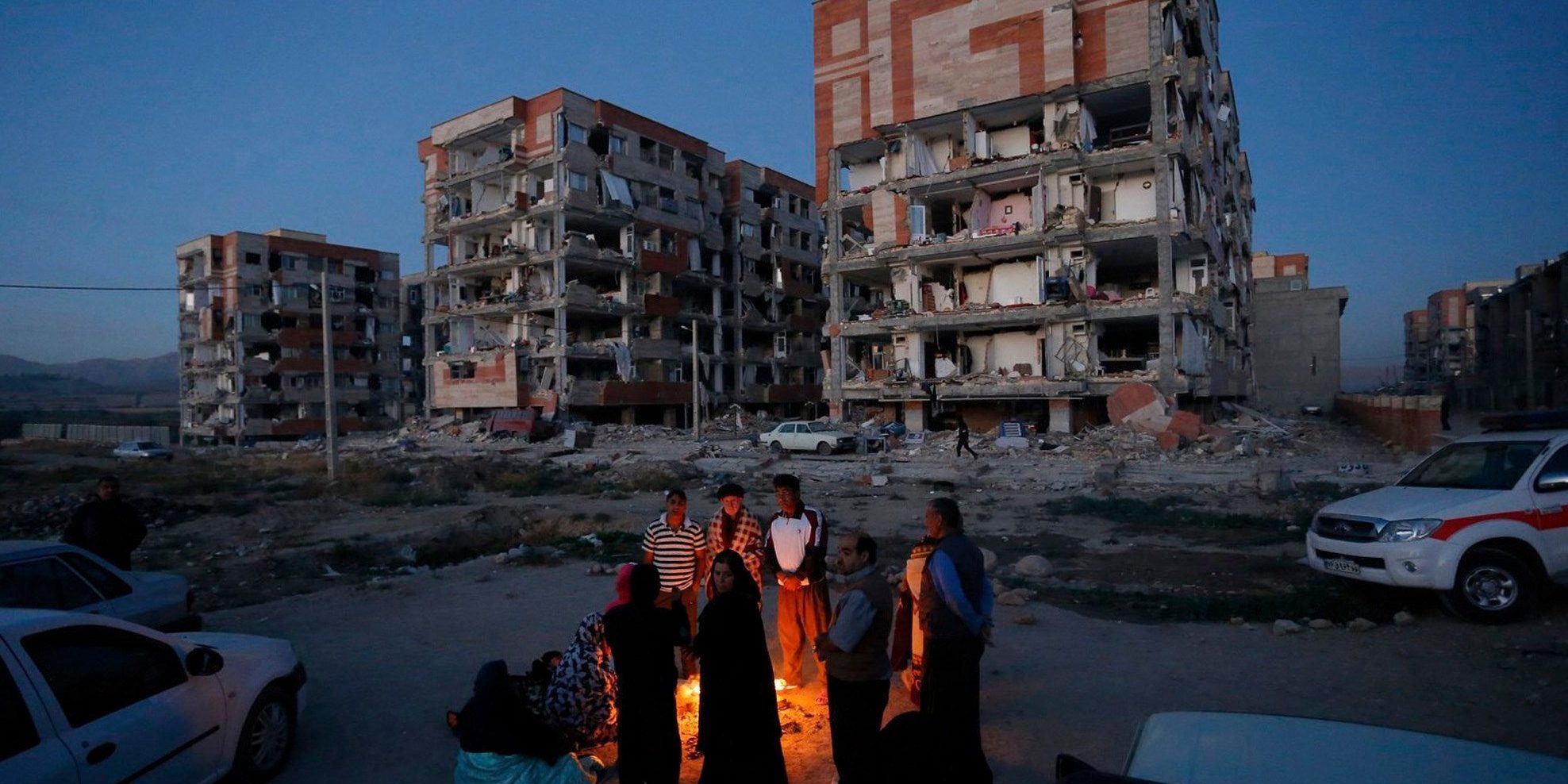 TEHRAN — Iranians dug through rubble in a frantic search for survivors on Monday, after a powerful earthquake struck near the Iraqi border, killing more than 450 people and injuring thousands of others in the world’s deadliest earthquake so far this year.

The quake, recorded at 9:18 p.m. on Sunday, was felt as far away as Turkey and Pakistan. The epicenter was near Ezgeleh, Iran, about 135 miles northeast of Baghdad, and had a preliminary magnitude of 7.3, according to the United States Geological Survey. Seismologists in the country said it was the biggest quake to hit the western part of Iran.

Photographs from the region — a patchwork of farms and home to many Kurds, a large ethnic minority in Iran — posted on the internet showed collapsed buildings, cars destroyed by rubble and people sleeping in the streets in fear of aftershocks.

At least 445 people were killed and 7,370 people were injured in Iran, according to the semi-official Tasnim news agency, which gave an estimate significantly higher than the death toll of 407 that officials had announced earlier.

At least eight people were killed on the Iraqi side of the border, according to Dr. Saif al-Badir, a spokesman for the Health Ministry, and at least 535 were hurt.

In Tehran, hundreds of people waited in line to donate blood in response to a call from the government. Ayatollah Ali Khamenei, Iran’s supreme leader, delivered a message of condolence on Monday, urging rescue workers to keep searching for survivors.

Particularly hard hit was Pol-e Zahab, a city in the western Iranian province of Kermanshah, according to the semiofficial Iranian Students News Agency. The authorities said that at least 236 people had died in the city, which has a population of 30,000, and the main hospital was believed to be at least partly running.

“My friend was screaming, saying, ‘I lost my home,’ ” one resident wrote on Twitter. “Thank God, she and her family are doing well. She said people were only mourning and their loved ones were under the rubble.”

One image from Pol-e Zahab appeared to show the near-destruction of an apartment block recently built for low-income families. Another, posted on the website Khabar Online, showed a pickup truck transporting victims under colorful blankets.

Farhad Tarji, a member of Parliament for Pol-e Zahab, told the semiofficial news agency ILNA that his family had been devastated by the quake. “I’ve lost 15 people,” he said.

The Iranian government newspaper posted a video on its website in which a resident of Pol-e Zahab complained that no aid had come.

“There has been no help yet, neither food nor water, no clothing, no tents, there is nothing,” said the resident, a man who appeared to be in his 30s, while standing in a street with collapsed buildings. “There are no facilities yet. We’ve slept outside since last night. This is the condition of our homes. Our electricity, water, gas, phone lines are out, everything is completely out, the whole city has been destroyed, it is wrecked.”

An image posted on social media showed soldiers searching through the rubble at night without flashlights or torches, using their cellphones for light.

Officials from the Health Ministry traveled to the area, as did the commander-in-chief of the Islamic Revolutionary Guards Corps, Brig. Gen. Mohammed Ali Jafari, but foreign reporters were not allowed to visit the scene, in a change from previous disasters.

The Iranian Red Crescent used rescue dogs to search for survivors, as it has since an earthquake in the southern city of Bam in 2003 that killed more than 20,000 people. The country’s religious leaders regard dogs as unclean, but the use of guard and rescue dogs is accepted.

Mahmoud Ahmadinejad, who was president of Iran from 2005 to 2013, introduced a program to build low-income housing, including in Pol-e Zahab. After the quake on Sunday, his political opponents said that many of the buildings had been poorly constructed, but his defenders said that the buildings were on fault lines, and that nothing could have been done.

Initial reports from the Kurdish region of Iraq indicated less damage and fewer deaths on that side of the border. In Sulaimaniya, the second-largest city in Iraq’s Kurdish region, residents described feeling heavy tremors but said there was no notable building damage. Residents in the oil-rich town of Kirkuk, roughly 50 miles to the west, reported similar damage.

Ali Namiq, a resident of the town Darbandikhan, Iraq, said a building was flattened by the quake. “The building fell on a seven-member family,” he told Reuters. “We managed to rescue only five out of them, while the two others were killed. It was the first time for me to see an earthquake. It is a divine act that no one can prevent.”

In the town of Kalar, Iraq, the quake sent items tumbling from shelves in a supermarket, causing shoppers to flee.

The quake occurred about 20 miles south of the Iraqi city of Halabja, where Saddam Hussein’s government launched a poison gas attack that killed more than 5,000 people, mostly Kurds, on March 16, 1988, in the closing days of the Iran-Iraq war.

The earthquake was felt as far as the Mediterranean coast of Israel. Shiite pilgrims in the Iraqi city of Karbala, for the annual religious commemoration of Arba’een, posted videos of people gathering on the streets after the earthquake.

Iran lies on dozens of fault lines and is prone to quakes. In 2012, a double earthquake in the north of the country killed 300 people. When residents learned of the government’s lackluster relief efforts, some started organizing aid groups themselves. After that quake, the United States, which does not maintain normal diplomatic relations with Iran, sent several planeloads of aid.