A powerful magnitude-7.3 earthquake has rocked the northern border region between Iran and Iraq, killing more than 400 people and injuring thousands more.

Iran’s state-run Irna news agency has raised the death toll to 407 and said 6,700 people were injured after the quake that struck the country’s western provinces at 9.20pm local time on Sunday. Tremors were felt hundreds of miles away in both capitals, in Tehran and Baghdad.

Local officials said the toll was likely to rise as search and rescue teams reached remote areas. More than 70,000 people were in need of emergency shelter, the Iranian Red Crescent said. 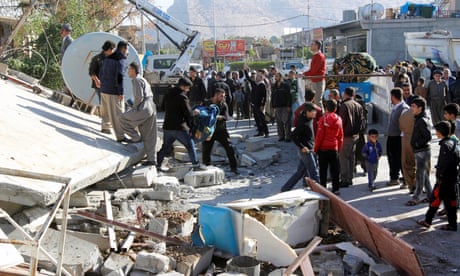 Earthquake hits border of Iran and Iraq – in pictures

The hardest hit province was Kermanshah, where three days of mourning have been announced. More than 236 people died in the town of Sarpol-e Zahab, about 10 miles from the Iraq border. In Kermanshah’s Dalahu county, the local governor was quoted as saying that some villages had been completely destroyed.

Farhad Tajari, the local MP, said 15 members of his family had been killed and that the town’s main hospital was severely damaged and struggling to treat hundreds of injured people.

“Sarpol-e Zahab has only one hospital, which was demolished in this incident. All patients and hospital staff have been buried beneath the rubble, so it cannot offer any service,” he told local media.

One reporter for Iran’s Nawa-i-Waqt weekly who visited Sarpol-e Zahab described the situation there as “disorganised”.

“There isn’t enough food, nor fuel and freezing cold can take lives. Children and the old are particularly hungry and many families have not yet been sheltered,” the reporter was quoted as saying, according to the Ilna news agency.

“More than 150 million people in Iran and Iraq, and also in their capitals, felt this earthquake,” said Mehdi Zare, of the Iranian Seismological Centre.

The quake killed at least seven people in Iraq and injured 535, all in the country’s northern, semi-autonomous Kurdish region, the interior ministry said.

The magnitude-7.3 quake was centred 19 miles (30.6km) outside the eastern Iraqi city of Halabja, according to the most recent measurements from the US Geological Survey. It struck at a depth of 14.4 miles (23.2km), a shallow depth that can have broader damage. Magnitude-7 earthquakes on their own are capable of widespread, heavy damage.

Rescuers worked through the night to find people trapped in collapsed buildings in towns affected by the quake, which was felt as far west as Israel and south to Baghdad.

Iran’s supreme leader, Ayatollah Ali Khamenei, offered his condolences and urged government agencies to do all they could to help those affected. Iranian police, the elite revolutionary guards and its affiliated Basij militia forces were dispatched to affected areas overnight, state TV reported.

The Iranian president, Hassan Rouhani, has asked his government to focus on the aid supply. A large number of Iranian internet users criticised Facebook for not activating its safety check feature.

Qasr-e-Shirin, another city in Kermanshah that serves as a gateway for the transfer of goods between Iran and Iraq, was also badly hit. At least 28 people are reported to have been killed there, Isna said.

Ismail Najjar, the head of Iran’s crisis management organisation, told Ilna: “The governor of Qasr-e-Shirin has reported that the number of those injured there is considerable and many are likely to be still under rubble.”

Another official said the death toll was likely to increase. “There are still people under the rubble. We hope the number of dead and injured won’t rise too much, but it will rise,” Kermanshah’s deputy governor, Mojtaba Nikkerdar, said.

Electricity was cut off in several Iranian and Iraqi cities, and fears of aftershocks sent thousands of people in both countries out on to the streets and parks in cold weather.

Iran’s interior minister, Abdolreza Rahmani Fazli, said some roads were blocked and there was concern about casualties in remote villages.

Pictures posted on social media from cities across Kermanshah showed collapsed buildings, apartment buildings losing their facades and cars smashed beneath rubble. People were busy recovering bodies as rescue dogs tried to find signs of life. Authorities reported that at least five of the area’s ancient ruins and historical sites had been damaged.

On the Iraqi side, the most extensive damage was in the town of Darbandikhan, 47 miles east of the city of Sulaimaniya in the semi-autonomous Kurdistan region. More than 30 people were injured in the town, according to the Kurdish health minister, Rekawt Hama Rasheed.

“The situation there is very critical,” Rasheed told Reuters. The district’s main hospital was severely damaged and had no power, he added, so the injured were taken to Sulaimaniya for treatment. Homes and buildings had extensive structural damage, he said.

In Halabja, local officials said a 12-year-old boy had died from an electric shock when an electric cable fell during the earthquake.

Many residents in the Iraqi capital, Baghdad, rushed out of houses and tall buildings in panic.

“I was sitting with my kids having dinner and suddenly the building was just dancing in the air,” said Majida Ameer, who ran out of her building in the capital’s Salihiya district with her three children. “I thought at first that it was a huge bomb. But then I heard everyone around me screaming: ‘Earthquake!’”

Iran sits astride major fault lines and is prone to frequent tremors. A magnitude 6.6 quake on 26 December 2003 devastated the historic city of Bam, killing more than 30,000 people.